Here we look at the types of ports rear panel and type bus. B

called a bus. A bus system is a collection of parallel conductors that carry data and control signals from one comp

onent to another. Given that the conductor in modern computers is the metallic traces found in the circuit boards. There are three types of bus systems that can be identified based on the type of information being brought. It includes bus addresses, bus data and bus controls.

How to Edit photos with Photoshop actions
The Bus address is a unidirectional pathway. Unidirectional means that information can only go one-way. The function of the path is to bring a phlegy address from the CPU to memory and I/O elements within that computer. The
number of conductors in buses determines the bus address. Bus address size Specifies memory location number and I/O element that can be address by microprocessor.
The data Bus is a bidirectional path for data flows. Bidirectional means the information can run in two directions. Data can flow along the bus data from the CPU to memory during a write operation, and data can be moved from the computer's memory to the CPU before

the read operation. However, if two devices use this data bus at the same time, there will be a data error. Any device connected to the data bus must have the ability to hold its output temporarily when it is not involved with the processor act

ivity. This status is called floating state. The size of the data bus, measured in bits, represents the letter size of a computer. In general, the larger the data bus, the faster the computer system.

The normal data bus size is 8-bit or 16-bit for the old system and 32-bit for the new system. The 64-bit bus system is currently still in its development phase.

The control Bus plays a role in carrying control and timing signals needed to coordinate the activities of the entire computer. Bus control signals do not have to be connected to each other, unlike bus data and addres

ses. Some are signal output from the CPU, some more are input signals to the CPU of the I/O elements in the system. Each type of microprocessor responds to different set control sign

als. The control signals commonly used today are as follows:

Apart from being seen on the motherboard that is mounted on chasing, then the back of the CPU will also appear several types of ports and sockets as shown in the image below. 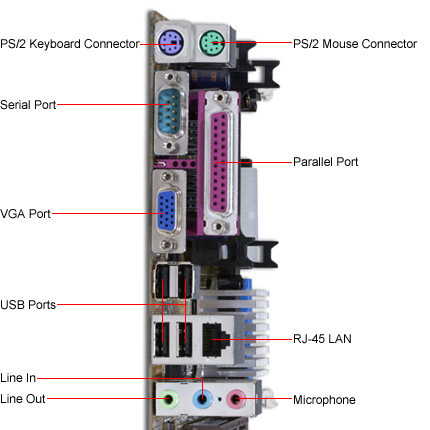 Information from each of the following sections:

1. Parallel port (LPT1 or LPT2): a
Port for equipment that works with data transmission in parallel. Examples of equipment are printers and scanners.

2. Serial Port (Com 1, Com 2):
A Port for equipment that works with transmitting data in Serial. Examples of equipment using this serial port are the mouse and modem.

3. AT/PS2 ports: G
enerally this type of port is used to input the keyboard and mouse connectors.

5. VGA Port: T
he Port is directly related to the screen. This Port is on a motherboard that uses a VGA chipset on board or using a VGA card placed on an AGP slot. If inside the motherboard does not have a VGA port, it should add a VGA Card.

6. Audio ports:
Ports that relate directly to audio equipment, such as tape, radio, speakers, or microphones. Motherboards are now many who use the on-board audio chipset.

Ports that are connected by a LAN/network cable that uses an RJ45 type connector cable. This Port is already available on Motheboard, because often the motherboard chipset has given the facility LAN on-board on the Motherboard.

Thank you for being willing to read this article, hopefully this article is beneficial to you and do not forget like and leave a comment or share to your friends who need article information this type of Port Rear Panel and Bus type.

How to identify network connection problems with Command Prompt