How to track computer network problems with Traceroute in Command Prompt

Traceroute is a Windows built-in command-line tool and other operating systems that can be applied to the Command Prompt to identify computer network problems. As with the ping command, it's a tool that can be used to understand Internet connection problems, including packet loss and high latency. If you are experie

ncing network issues while connected to a website, traceroute can tell you the point of the problem that you are experiencing. Traceroute can also help visualize the path the traffic takes between your computer and the Web server. Ho

w Traceroutewhen yo
u connect to the website-the Mialnya visits, firgoos.com-traffic should go through several intermediaries before reaching the website. Traffic passes through your local router, your Internet service provider's router, to a larger network, and s

o on. Traceroute can indicate the traffic path needed to reach the website. It also displays delays occurring at each stop. If you're having trouble reaching websites and websites it works well, there may be a problem between your computer and the website's server. Thus, Raceroute will show you where the problem is. We have us

ceroute sends a package sequence using the ICMP protocol (the same protocol that is used for the ping command.) The first package has a time-to-live (also known as a TTL, or a hop limit) of 1, the second package has a TTL of 2, and so on. Each time a packet is passed to a new router, the TTL is reduced by 1. When it reaches 0, the packet is discarded and the router returns an error message. By submitting packets in this manner, traceroute ensures that each router in the path will throw packets and send respon

ses. How to use Tracerout
eTraceroute run from a command prompt or a terminal window. In Windows, press the Windows key, type Command Prompt, and press Enter to launch i

t. To run Traceroute, run the tracert command followed by the website address. For example, if you want to run traceroute at firgoos.com, you will run a command Prompt on Command:

(On Mac or Linux, run traceroute firgoos.com instead.) You

will gradually see the route take shape when your computer receives a response from the router along the way. 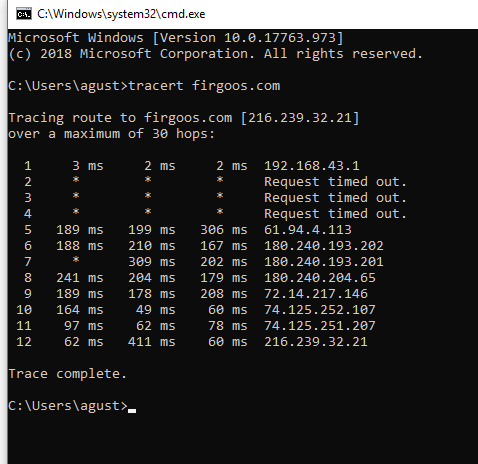 If you're running traceroute for other websites – especially those that are hosted in different regions of the world – you'll see the difference in the path. The first "hop" equals the traffic that reaches your ISP, while the next Hop differs from the package that goes elsewhere. For example, below you can see the package traveling to google.com in another country. 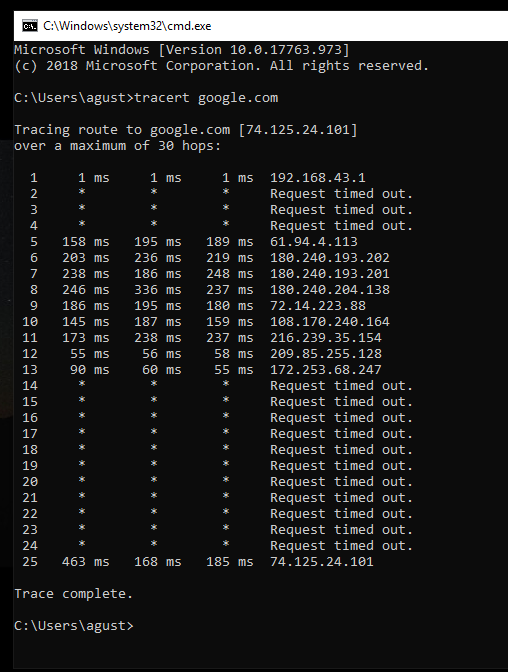 . The Format of each row is as follows:

Hop: Each time a packet is passed in between routers, it's referred to as "hop." For example, in the above output, we can see that it takes 12 jumps to reach the firgoos.com server from my current locat

ion. RTT1, RTT2, RTT3: This is the round-trip time necessary for a package to reach the hop and return to your computer (in milliseconds). This is often referred to as latency, and the same number that you see when using Ping. Traceroute sends three packages for each hop and displays each time, so you have an idea of how consistent (or inconsistent) that latency is. If you see * in some columns, you don't receive a response – which can indicate packet loss. Domain Nam

e: The doma[Alamat IP]in name, if available, can often help you see the location of the router. If this is not available, only the router's IP address is displayed.